This is according to a newly released report by PRRI. 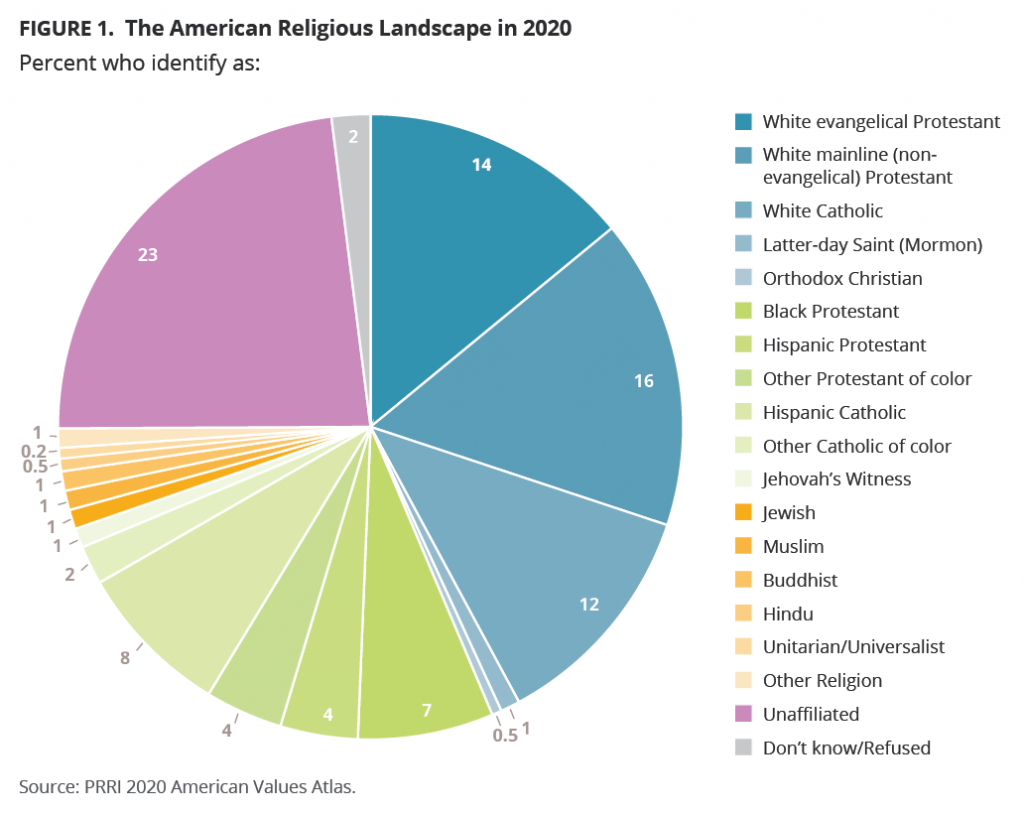 The most substantial cultural and political divides are between white Christians and Christians of color. More than four in ten Americans (44%) identify as white Christian, including white evangelical Protestants (14%), white mainline (non-evangelical) Protestants (16%), and white Catholics (12%), as well as small percentages who identify as Latter-day Saint (Mormon), Jehovah’s Witness, and Orthodox Christian. Christians of color include Hispanic Catholics (8%), Black Protestants (7%), Hispanic Protestants (4%), other Protestants of color (4%), and other Catholics of color (2%)[3]. The rest of the religiously affiliated Americans belong to non-Christian groups, including 1% who are Jewish, 1% Muslim, 1% Buddhist, 0.5% Hindu, and 1% who identify with other religions. Religiously unaffiliated Americans comprise those who do not claim any particular religious affiliation (17%) and those who identify as atheist (3%) or agnostic (3%).

Over the last few decades, the proportion of the U.S. population that is white Christian has declined by nearly one-third. As recently as 1996, almost two-thirds of Americans (65%) identified as white and Christian. By 2006, that had declined to 54%, and by 2017 it was down to 43%[4]. The proportion of white Christians hit a low point in 2018, at 42%, and rebounded slightly in 2019 and 2020, to 44%. That tick upward indicates the decline is slowing from its pace of losing roughly 11% per decade.

The slight increase in white Christians between 2018 and 2020 was driven primarily by an uptick in the proportion of white mainline (non-evangelical) Protestants and a stabilization in the proportion of white Catholics. Since 2007, white mainline (non-evangelical) Protestants have declined from 19% of the population to a low of 13% in 2016, but the last three years have seen small but steady increases, up to 16% in 2020. White Catholics have also declined from a high point of 16% of the population in 2008, and their low point of 11% occurred in 2018. It is unclear if the bump back up to 12% in 2020 indicates a new trend.

The Rise of the “Nones” Slows

Stability Among Christians of Color and Non-Christian Religious Groups

The proportions of Christians of color and non-Christian religious people feature more modest shifts. While the numbers are small, African American Protestants makeup 8% of Americans ages 65 and older but only 5% of Americans under the age of 30. By contrast, the proportions of Hispanic Protestants, Hispanic Catholics, and adherents to other world religions are significantly higher among younger Americans than among people over 65.

White evangelical Protestants are the oldest religious group in the U.S., with a median age of 56, compared to the median age in the country of 47. White Catholics and Unitarian Universalists have median ages of 54 and 53 years old, respectively. Black Protestants and white mainline Protestants have a median age of 50. All other groups have median ages below 50: Jehovah’s Witnesses (49), Jewish Americans (48), Latter-day Saints (47), Orthodox Christians (42), Hispanic Catholics (42), Hispanic Protestants (39), religiously unaffiliated people (38), Buddhists (36), Hindus (36), and Muslims (33). In the youngest groups, one-third of Hindu (33%) and Buddhist (34%) Americans and 42% of Muslim Americans are in the 18–29 age category.

Pray One ‘Our Father’ and Ten ‘Hail Marys’

October 22, 2021
Dioceses Across United States Will Hold Events to Foster Appreciation for all Vocations